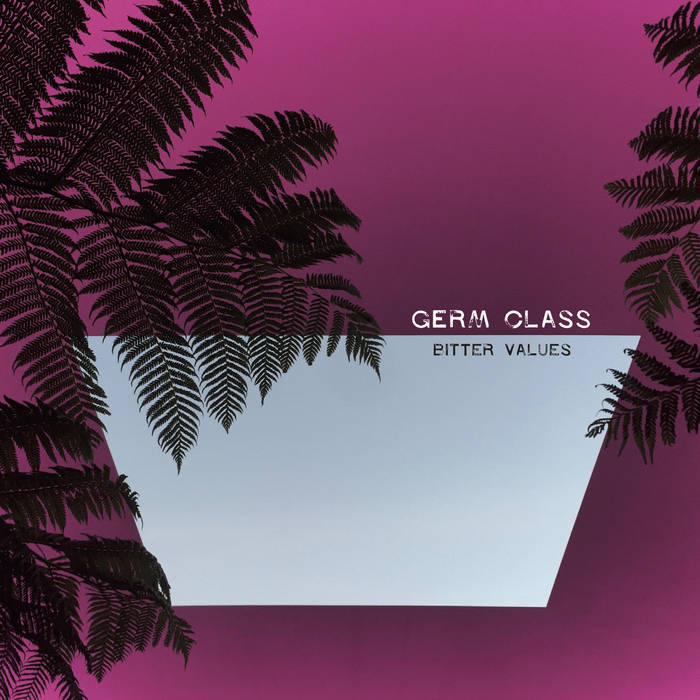 Germ Class is the collaboration of the most mysterious German Army and L.A. Dream Pop duo Dunes.
Bitter Values collects the Dimensions of Value cassette as well as the Eat Bitter CDR. Remastered and resequenced for this release.
The basic structures of GeAr's Throbbing Gristle aesthetic combines with the airy pop of Dunes for a familiar yet foreign experience that is sure to sooth without becoming sonic wallpaper. -Crizwell

One of the most unforgivable sins of the broad church of sounds collected under the umbrella of chillwave was its reactionary misapplication of reverb, as some sort of analogue for the blurry waves of a beach where all the beautiful people gather to generate future memories whose only goal is to be blurrily shared. It sounds like Instagrammatical history, the (appallingly inaccurate) trailer for Her or an advert for Apple Photos. The nightmarish stasis of the stationary state.

We defrag our system of hate with a progressive utilisation of reverb, by this wonderful German Army/Dunes collaboration, Germ Class: to us, Complex Glow represents the hypnotically fractal interconnectedness of reality, the confusion between cause and consequence, the entropy that creeps in as old sounds are resurrected to roam a world where everything has to exist at the same time, forever. It is the shockwave of things speeding up, not the other way around. - XX JFG

Germ Class is a collaboration between the mysterious German Army who has worked with Night-People in the past and Dunes the LA based dreamy pop trio with prior releases on Post Present Medium. The collaboration rests a bit closer to Germany Armys past work then Dunes but its a collaboration that is very much a sum of its parts in outcome and keeps with a focused but experimental approach overall. Loose drum patterns form the base for drifting vocals pages that balance between the industrial grit and darkness of German Army and the more melodic ethereal qualities of Dunes work. Overall the music sounds a bit like the less harsh aspects of Throbbing Gristles catalog meeting up with the more experimental sides of early Cocteau Twins. - Night People

Typically when reviewing music the best place to start is the beginning. What are your first impressions? What happens when you first press play? That sort of thing. But with this CD from Germ Class, I think I shall instead take it from the end. There is this interesting line at the end of this album that says "Unique is not so unique". It reminds me of how we're conditioned to think that we are all so different and we're all so special but if we're all different then aren't we all really the same?

As an example based on music, let's say you have a particular piece of music or even an artist who just seems to defy genre. Eventually, don't you believe you're going to have more than one such situation? Won't you even potentially reach a point where group all of these artists into some kind of genre-less tag on Bandcamp? Doesn't that take away from their unique attributes on some level?

There are many ways to describe the music of Germ Class but I bet few people who talk about it will actually describe it as Germ Class. Wouldn't it be so refreshing if we could just say "Germ Class? They sound like Germ Class" and do that for all the great artists making music? Of course, I can't because I'm trying to tell you as someone writing a review and saying that isn't really helpful when you are making your decision as to whether or not to buy this CD, in theory.

Electronics and spoken word, trippy and Phil Collins drums are some of the things which can be heard on "Bitter Values". Somewhere between SPC ECO and Garbage there is a definite Breakfast Club feel to this as well, which just takes me back to when I first started Raised by Gypsies and got into shoegaze. Throughout the album it has this chill vibe overall. The tenth track can feel like a western and fifteen can sound like something out of a Tarantino movie but the two are unrelated.

One of the big take aways from this CD is that it seems to be music over vocals as well. I think the idea of saying something is instrumental (without vocals) or not needs to change. I've discussed before the ideas of having music which can be labeled by the percentage of vocals. Less vocals could be a 60% or 75% type of artist. But who has time to do the math? Music is made up of a lot of math though, at its core, but I just see it as wonderous, especially with artists like Germ Class.

German Army combining forces with Dunes producing Germ Class. This beautifully produced and packaged compact disc on Dub Ditch Picnic brings the sold out world of cassettes and compact disc back and more massive than before. Bitter Values combines two earlier works by Germ Class, the first on the Portugal label OTA. A limited run, at the end of last year, of fifty cassettes titled Dimensions of Value. These quickly sold out. The second portion of Bitter Values consist of a an earlier 2015 composition titled Eat Bitter. This was released on cassette by the label Night People and also on CDR by Subsist Records from Valencia, Spain.

Hard labor over lifetimes, engines churning, natural light kept out, particulates in the air kept in.... Blank faces performing monotonous duties until injury or age keeps them away. These are the motions of slow mechanized beats, electronic processes only natural in the contained environment they exist. This is one portion of the sounds making Germ Class. Eventually the structure deteriorates, beams of sunlight expose thick stale air. Eyes looking up, averting from decades of fixed focus. Voices are heard , human or ethereal, hard to discern as the machinery still trudges on. The cloud of unconsciousness thought begins to lift. Struggle results. Living in a world of daily toil and not knowing is worse than knowing there is beauty outside the confines. This is Bitter Values, a paradox in sonic form. Genres colliding in a massive impact. The expected outcome would be a tangled catastrophe, instead intriguing seductiveness in a lengthy outpouring.

This compact disc is released in an edition of three hundred by the long lived label Dub Ditch Picnic. Available from the label's bandcamp page. There is a lot of music there, so don't get lost.

- Lost in a Sea of Sound

Exhumed and Gruesome's Matt Harvey checks in, with jams from Cannibal Corpse, Midnight and more